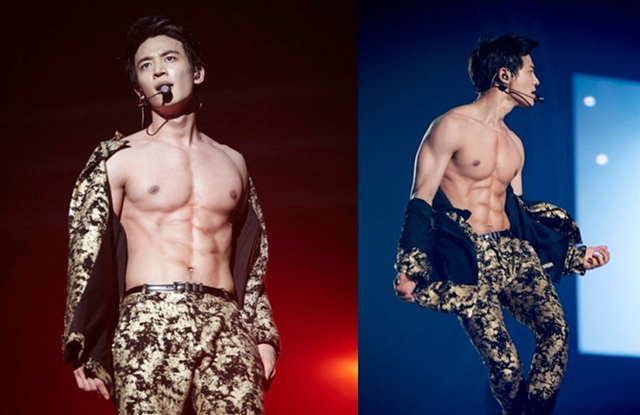 With high standards, K-Pop idols are known notoriously for how hard they work. Aside from their dance training, K-Pop stars also frequent gyms to ensure their bodies are always in perfect condition.

Below are the following top 10 Most Fit K-Pop Male Idols:

Well-known for being one of the most athletic idols, Minho is often praised for both his looks and physique. Out of all members, he showcases his eight-pack body the most. There is no doubt that his muscles look very attractive and well-defined.

The 25-year-old is no weakling despite his soft features. In one of NCT’s concert practice videos, Jaehyun had fans squealing when he lifted his shirt to show off his hard-earned muscles.

Being a member of a group that gained a great reputation as beastly idols, Junho is highly disciplined and works out heavily to keep his body in shape. In his comeback appearance on reality show I Live Alone, he revealed his strict workout routine in his home gym involving cycling, push-ups, and battle ropes.

Aside from being the group’s main dancer, the global star is also known to be responsible of ab reveals. Making great contrasts with his sweet face and devilish hot body, Jimin is a huge bias wrecker and his solo dance performances are always a work of art.

Alongside Jimin, youngest member Jungkook also does not lose out with his defined muscles.

Like a secret weapon, he gives fans a quick peek whenever he wants to fire up the crowd and keep things heated.

Given the title as “Face Genius” by Korean media, Cha Eun Woo redefined the meaning of “Male God”. Eun Woo is seemingly perfect in all areas with his gorgeous face, muscular arms, strong athletic ability, and heart-melting eye-smiles.

The leader of Super Junior certainly cannot bear huge responsibility for the group without a pack of lean muscles. Actively sharing his exercise results on social media, he won many admirers for his beautiful lines and masculine appearance.

Although his band boy image might seem he does not train, the 32-year-old has gotten more charming and masculine after his military service. Viewers took a double take in surprise with his fit body in his drama Sell Your Haunted House.

Although always athletic, Jackson took upon the challenge to transform himself into a muscular idol with heavy dieting and gym training in recent years. Boasting his results on social media, Jackson is known for applying self-discipline in achieving a manga-like drawn body.

Since his debut, Taec Yeon has always been eye-catching with his broad shoulders and beastly muscles. He even got titled “Captain Korea” when a photo of his military days became viral, because his chest muscles had almost busted out of his uniform.